The Practice of Za-Zen

The secret of Zen is the practice of zazen

Zazen is difficult, I know. But, practiced daily, it is a very effective way of expanding consciousness and developing intuition. Zazen releases and mobilizes energy; it is also the posture of awakening.

While practicing one must not try to achieve or obtain anything; there is no object, only concentration on posture, breathing, and attitude of mind.

Seated in the middle of the zafu (a round cushion), one crosses the legs in full or half-lotus position. If this is impossible, the legs are simply crossed without placing either foot on the opposite thigh, but it is essential that both knees press firmly against the ﬂoor.

In the lotus position, the feet pressing against the thighs activate major acupuncture points corresponding to meridians or the liver, gall bladder, and kidneys. The samurai of old automatically stimulated these centers by the pressure of their thighs against the ﬂanks of their horse.

At the level of the fifth lumbar vertebra, the pelvis is tipped slightly forward, the waist is hollowed slightly but the back is straight. The knees push down toward the earth, and the head pushes up toward the sky. The chin must be drawn in, which means that the nape of the neck is pressed up and back. The abdomen is relaxed, the nose directly over the navel.

The body is like a drawn bow, the mind its arrow.

After assuming this position, the fists (closed around the thumb) are placed on the thighs near the knees, fingers facing up, and the body sways, leaning neither forward nor back, seven or eight times to the right and left, each time reducing the movement until it comes to rest at the point of vertical balance.

Then gassho - that is, the hands are placed together, palms facing, at shoulder level, the arms remaining horizontal. Gassho is the gesture of respect and reconciliation, the creation of balance, union. Then, the left hand is placed palm upwards in the right, little fingers touching the abdomen. The tips of the thumbs touch, and slight pressure is exerted to maintain a horizontal line along the top of the thumbs - neither mountain nor valley.

The shoulders are thrown slightly back and down, but fall naturally. The tip of the tongue touches the palate behind the upper teeth. The eyes look down, about one yard ahead; in fact, they are looking inside. Half-closed, they focus on nothing, even if, intuitively, they see everything.

Breathing is most important. Everything that lives, breathes. In the beginning is the breath.

Zen breathing is like no other kind. Its chief aim is to establish a slow, powerful, natural rhythm.

If you concentrate on breathing out, long, deep, and gently, and fix your attention on the posture, then the breathing in will take care of itself. The air is expelled slowly and silently, while the pressure of the movement exerts a powerful downward force in the abdomen. You “push down on the intestines,” thereby massaging the internal organs.

Zen masters compare Zen breathing with the mooing of a cow or the exhalation of a baby crying right after birth. This breathing is the om, the seed, the pneuma, the source of all life.

The Attitude of the Mind

Correct breathing can follow only from correct posture. In the same way, the right attitude of mind ﬂows naturally from a profound concentration on posture and breathing. Whatever has “wind” lives long, intensely, and tranquilly. The practice of proper breathing enables nervous reactions to be neutralized, instincts and emotions controlled, and mental activity directed.

Circulation within the brain is significantly improved. The cortex rests and the commons stream of thoughts ceases, while blood is freed to irrigate deeper levels. They wake from their half-slumber and their activity confers a sense of well-being, serenity, and calm, very close to deep sleep yet fully awake.

The nervous system is relaxed, the “primitive” brain active. One is receptive, attentive to the highest degree, trough every cell in the body. One thinks with the body, unconsciously; all duality and contradictions are left behind, and there is no needless expense of energy.

So called primitive peoples still have an active “old” brain. In developing our kind of civilization we have educated the intellect, refined and complicated it, and lost the strength, intuition, and wisdom that derive from the inner nucleus of the brain.

That is why Zen is a priceless treasure for people today, or at least for those who have eyes to see and ears to hear.

Through the regular practice of zazen they are given the opportunity to become new by returning to the origins of life. By grasping the very root of existence, they can accede to a normal condition of body and mind (which are one).

When seated in zazen, the images, thoughts, mental constructions arising from the unconscious are allowed to ﬂoat past like clouds in the sky, with no resistance and no hanging back. Like shadows before a mirror, the emanations of the subconscious drift back and forth, and vanish away. And one reaches the deep unconscious hishiryo - where there is no thought, beyond all thought, true purity.

Zen is very simple and at the same time hard to understand. It is a matter of effort and repetition - like life.

Sitting there with nothing to do, with no object or desire for profit, if your posture, breathing, and attitude of mind are in harmony, you can understand true Zen, you can perceive the nature of Buddha.. 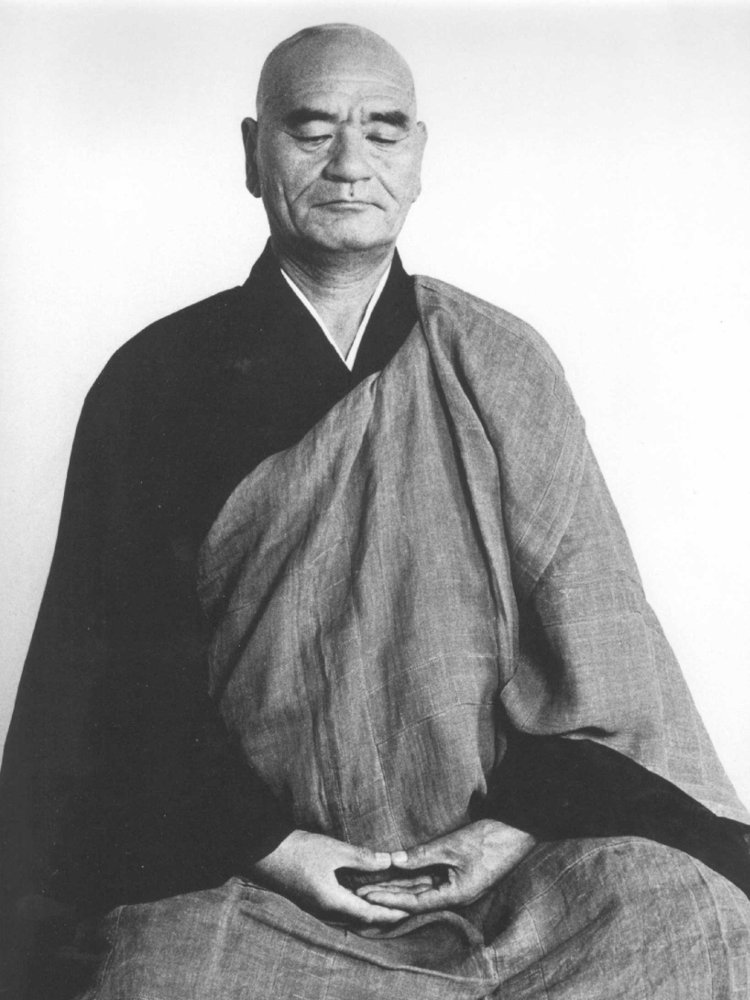